I was over at my best friend’s house playing cards when he walked in. I knew who he was immediately. He used to quarterback the high school football team and he played the drums. I also knew who he ran around with because my friends and I thought they were all cute. I had just graduated high school, and he was finishing up college. He had no idea who I was.

We all sat around playing cards and having a good time. My friends kept kicking me under the table and nudging their heads at him. I was still having a difficult time getting over my previous relationship, and was blind to the fact that he was showing interest. We ended up talking late into the night. I felt comfortable with him, and I opened up about the relationship I had just came out of. He showed empathy, and said no one should ever be treated that way, and he was sorry I had to go through that. He asked for my number before he left, and I honestly didn’t think I would hear from him. His name was Jason.

A week later I came home from work. My mom said Jason had called, and they had talked for almost an hour! He had asked me to go to a concert with him, and I was having a hard time deciding. It wasn’t because I wasn’t interested…it was because I didn’t feel good enough for him. All I saw was my past; and I just knew that once he heard it, or any rumors, he would be out. I had already been hurt enough, and I just couldn’t go through it again.

I did go on that date with him though, and several more after that. That was (and still is) the best summer of my life. Fall came and he started his last semester of college and I began my first semester of nursing school. We would email on our breaks and spend every weekend together. He would surprise me by being at my house when I would get home. He enjoyed just spending time with me AND my family…and I loved his family. 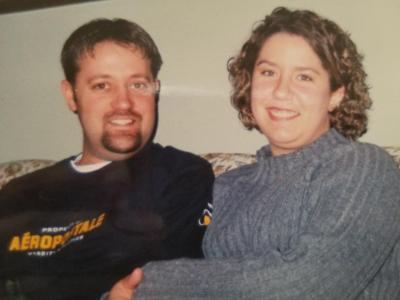 Jason’s parents were remarkable. They had eight children, Jason being the youngest, and a huge extended family. They loved each other, their family, and God. It was because of Jason and his family that I started attending church again. The amount of respect that Jason gave his parents, and his parents toward him and each other, I had never experienced personally.

The choices I had made as a young teenager took a toll on my mom and our relationship. We fought constantly, were both stubborn, and said things to each other that were so incredibly hurtful. The more serious Jason and I became, the more I started to compare our families. The resentment and bitterness of my younger years started to take hold.

Jason and I had our disagreements, which mostly centered around how I fit into his life. We had an age gap between us. His friends wanted to still go out, and he was torn between spending time with me or leaving me out, and he would receive grief from them. I was coming from a place of not trusting men, of feeling rejected, and was really just waiting for him to figure out that he deserved better. He seemed too good to be true. He never raised his voice at me, he didn’t resort to name calling, and he never would even think to lay a hand on me. I didn’t understand it. I was used to a different way of handling conflict.

I eventually started staying with Jason on a routine basis. I had left nursing school and started taking classes to become a dental assistant. Jason had finished up college and was trying to find a job he would enjoy. He wasn’t having much luck finding a job in the field he had majored in, and I could see that he started to become disappointed in himself. The apartment lease he had with his roommate was coming up for renewal, and we decided to get our own place. Jason finally found a job, I had accepted a job through my externship with school, and I officially moved out of my little small town to the Indianapolis area. I was twenty years old.

Life was good. We were in love. Jason was making good money, and I had a rewarding and stable job. I felt like I was finally starting to find myself. I was away from my past. The new friends I had made didn’t know what my story was, and they saw me for me…and they actually liked me. I didn’t have to wear a mask anymore. I was growing up and no longer felt like I had the chains of my past holding me back. We would still go home on the weekends and visit, and it was good. We would attend church, my relationship with my mom had grown, and I had been warmly welcomed by his family and several friends.

Finally, in April 2003, Jason walked into my work during a meeting. He was wearing a shirt and tie, dress pants, and holding a bouquet of roses. My coworkers all looked at me and smiled…

Jason got down on one knee…