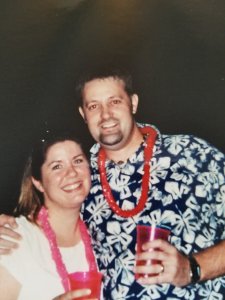 The stress of finding a job and not conceiving started to take a toll. Jason settled for a job with a lawn care company, and took a major cut in pay (by major, I mean 30K). We were still able to make ends meet, but it was tough. We didn’t want to appear to our friends and family like we didn’t have it all together. As a result of that way of thinking, our credit card debt started accumulating.

We were also trying to figure out why we weren’t conceiving, so I had made an appointment with an ob/gyn. I went for some bloodwork, and was told that my body did not ovulate regularly. She recommended Clomid, but felt I needed to lose thirty pounds before I could start the medication. I had been diagnosed with hypertension and she felt I would be a high risk pregnancy. I left that appointment devastated. I called my mom while I was in the parking lot. I could barely speak. Yes, I had gained weight and was not the 130 pounds I used to be; but I was not obese. (See above picture.) I thought I couldn’t have children… and I blamed myself.

I thought…if only I hadn’t been a promiscuous teen, God wouldn’t be punishing me for my past choices. I thought that  I had to earn His approval and grace. That He must think I am just not deserving enough to be blessed with a child. I did get to work though. I started exercising regularly and lost 15 pounds. My next appointment, she was happy with my progress, but wanted me to lose another fifteen. My co-worker, and good friend, said I needed to get a second opinion. She recommended me to her family doctor.

“I thought…if only I hadn’t been a promiscuous teen, God wouldn’t be  punishing me for my past choices. I thought that  I had to earn His approval and grace. That He must think I am just not deserving enough to be blessed with a child.”

The new doctor reviewed my test results, blood pressure, and weight loss. She didn’t agree. She thought I was at a healthy weight, and did not need to take blood pressure medication. She believed I could get pregnant on my own, but to help with some weight loss and ovulation, she put me on metformin. It was also known to help with those two things.

So, where was God in all of this?  Shortly after taking my job, a couple coworkers of mine invited me to their church, The Vineyard. I had never experienced church quite like this. It was the main portion of a strip mall. It was a large open area with seating, a coffee/doughnut bar, a full band, and a children’s church area set apart from the adult service.  The members were of all ages and walks of life…and everyone was welcomed. I had started a relationship with God as an adult. Jason and I both became more involved at The Vineyard. I had joined the dance ministry team and Jason was involved in the sports ministry. I had filled notebooks of prayers for our finances, a child, my work… but I wasn’t really in God’s Word. I also still carried around my past and believed that grace was something I had to earn.

“I also still carried around my past and believed that grace was something I had to earn.”

I was to follow up with my new doctor a month after my first appointment for additional testing. Leading up to that appointment, I began to feel off and tired. I was at dance practice and my equilibrium was off. The girls thought I should take a test; so after practice I stopped at Walgreens. Jason and I had been trying for 13 months when God answered my prayer…