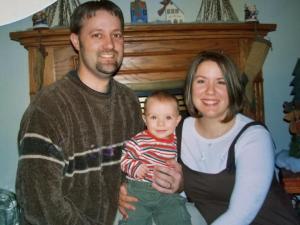 We had tried for so long to have a child, and here we were with the family we had prayed for and a sense of accomplishment; and then the bottom fell out. It was one of the first times in my life that I was unsure about my future. I felt like a failure. I remember having sleepless nights filled with worry, and honestly not knowing how we were going to do it.

“It was one of the first times in my life that I was unsure about my future. I felt like a failure. “

I had mixed emotions about moving back home. I was excited because we would be around our family, and Noah would be around all of his grandparents. On the flip side, being a husband and father who was unemployed was not the dream I had envisioned.  The job search was stressful and wasn’t going anywhere.

I was blessed to have quality time with my son. I am the youngest of eight children, and my parents were older. I always worried how long my parents, especially my dad, would be around to see my kids. I remembered that even though it was hard dealing with what I thought was failure, I was very happy that there was a special bond happening between my dad, Noah, and me. My dad reassured me that although we had to move back and not have our own place, he and mom would help in anyway they could.  I enjoyed that time, but had a sense of guilt. I felt like roles were reversed..I should have been the one working, and Misty should have been the one home with Noah.

I felt there were some positives to moving back home. We didn’t realize how much we missed small town living and how great it can be to raise a family. It was also a relief to live by family, and especially grandparents!

Jason going without a job for several months, despite applying for various positions, was incredibly stressful. I was continuing to make the hour drive to my work, but without Jason working, we couldn’t implement the plan we had going into moving in with my parents. Plus, lets face it, it isn’t easy living with your parents as an adult; especially when you’re married with a baby.

Finally, in the spring of 2008, a friend’s husband reached out and asked if I would be interested in working at the company he worked for in Greenwood. It was a sales position, but salary based plus yearly bonuses. I got the job! They even were willing to accomodate my hours to match Misty’s so we could carpool together. The money was decent, and we were finally able to start saving for a home. My parents also wanted to watch Noah for us, so we were able to save on child care.

We celebrated Noah’s first birthday still living with my parents. Looking back, all was a blessing. My step-dad never had biological children, but he was able to watch Noah grow from infancy. My parents were there when Noah started crawling, sitting up, said his first word, and took his first steps.

We ended up living with my parents a year. We were able to pay off some of our debt, and in the fall of 2008, we purchased our first home!! We had finally caught a break and things were looking up.

Noah also was able to bond more closely with his paternal grandparents since they watched him daily. They were able to watch him for two years until my mother-in-law had some health issues that required us to look for other child care. Noah also had some speech delay. He really could only say ‘dada’. We had started teaching him sign language around 6 months. Noah would sign to us, but could not say the words. He started having speech therapy, and when he was 2.5, I finally heard the word I had been longing to hear.. mama.

We were a happy family for the most part, but inwardly I had started to struggle. I shared in a previous post, “if you don’t confront the pieces of you that are broken, if you continue to put bandaid after bandaid on your wounds…you will never heal”. Well, I was faced with that reality. I had been away from my little home town for some time. I thought I had a new identity and had moved past my insecurities as a teenager. I thought I had forgiven things I had done and those who had hurt me.

One thought on “Chapter Ten… A Different Perspective”