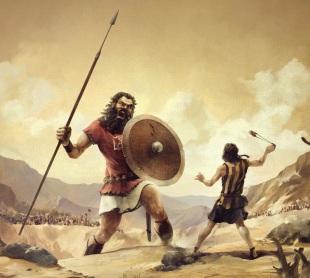 If you have been following my blog, you are probably wondering why I am writing about sports! I titled my blog Living by Grace because I am in need of the Lord’s grace in ALL areas of my life; and that includes being a wife to a volunteer youth football coach.

It can be incredibly difficult to sit on the sidelines and have to observe and over hear the negative comments about coaching decisions and the character of my husband, as well as, the other coaches. All I want to do is cheer on my 9 year old son and his teammates. I want to see each and every player improve and find the love for the game. I want them to  learn respect, discipline, endurance, hard work, and to never give up. Unfortunately, it seems not all youth sport parents have that same desire or fail to realize their actions and choices go against the very thing they want their children to learn.

Let me first share some things about Goliath, for those who may not be familiar. You can find David and Goliath in 1 Samuel 17:

“A champion named Goliath, who was from Gath, came out of the Philistine camp. He was over nine feet tall……. Goliath stood and shouted to the ranks of Israel, ‘Why do you come out and line up for battle? Am I not a Philistine, and are you not the servants of Saul? Choose a man and have him come down to me. If he is able to fight and kill me, we will become your subjects; but if I overcome him and kill him, you will become our subjects and serve us.’….For forty days the Philistine came forward every morning and evening and took his stand. “

Goliath was good with his weapons and had not been defeated. I would say he even had great knowledge of war and how to win; BUT, Goliath was also a bully. He believed the louder he would get, the more threats he would make, and the more followers he had behind him, would guarantee his victory.

“Now David was the son of an Ephrathite named Jesse….Jesse had eight sons…..David was the youngest. The three oldest followed Saul, but David went back and forth from Saul to tend his father’s sheep at Bethlehem….Early in the morning David left the flock with a shepherd, loaded up and set out, as Jesse had directed. He reached the camp as the army was going out to its battle positions, shouting the war cry… David asked the men standing near him, ‘What will be done for the man who kills this Philistine and removes this disgrace from Israel? Who is this uncircumcised Philistine that he should defy the armies of the living God?’ “

David was a shepherd. He was in charge of leading and taking care of the sheep in the pasture. He was the youngest and most thought he was probably the least experienced in war; BUT, David worshiped the living God. He believed that with God on your side, nothing is impossible.

We live in a world where people have become apathetic to those around us. We are too busy “being right” or “knowing more”. We can be so blinded by these two things that we forget that we have little eyes watching us.

Are parents the new Goliath of youth sports?

We teach our children to respect others and those in authority, to be kind to others, never give up, and why hard work and discipline is so important. Each of these things are what our children are going to need to survive in the world; but as parents of children in youth sports, have we forgotten what those very things mean??

I’m not saying all coaches have it right, and I’m not saying all parents have this Goliath mentality. I am saying, as a coaches wife and the mother of a youth athlete, that enough is enough. Remember that these coaches are human and volunteers; as well as, fathers to some of the children who are watching you. Remember that our children are there to have fun and play a game they enjoy.

I suppose I should end with how things turned out with David and Goliath:

“David said to Saul, ‘Let no one lose heart on account of this Philistine; your servant will go and fight him.’ Saul replied, ‘ You are not able to go out against this Philistine and fight him; you are only a boy, and he has been a fighting man from his youth.But David said to Saul….’The Lord who delivered me from the paw of the lion and the paw of the bear will deliver me from the hand of this Philistine.’……..David said to the Philistine, ‘You come against me with sword and spear and javelin, but I come against you in the name of the Lord Almighty, the God of the armies of Israel, whom you have defied.’ As the Philistine moved closer to attack him, David ran quickly toward the battle line to meet him. Reaching into his bag and taking out a stone, he slung it and struck the Philistine on the forehead. The stone sank into his forehead, and he fell face down on the ground.”

David defeated the Giant. He defeated the bully. He did that by having complete faith in the Lord; by believing the Lord would deliver him from the hands of the giant he was facing. David was a man of character who did not let the lies of an individual replace the truths of the Almighty Lord.

I will say that I know my husband better than anyone; and especially better than anyone sitting on a sideline. I also know the other volunteer coaches fairly well. I could not ask for better men of character to lead our children and youth. They chose to do so because they love the game and have a desire to teach that to children.  So my final questions are these….

Are you a Goliath? or are you a David?